Below is a selection of cases John has undertaken over the years.

Case studies:#1. Tracing a lady named “Maureen” not seen by our client since 1966

Lost friend tracing. Find a lost friend. A UK ex-pat on an extended two months holiday from the USA. Our client met her at a local dance-hall. After they spent her entire holiday in each other’s company.

On her day of departure, he offered to drive her to Heathrow Airport. But due to traffic congestion not even time for a brief kiss, she just rushed into the terminal building.

They agreed to at least keep in touch. But sadly this didn’t happen.

Our client had an address in Detroit dating back to 1967 not encouraging. A common Christian name and a lesser-known surname. But unless she remained single it would have changed so no use!

After months of combing through the Internet a breakthrough came. A lady with the same name but a hyphenated surname.

Sure enough, it turned out to be exactly who we were looking for!

Today they are both living alone widow and widower on opposite sides of the Atlantic. In regular contact and hopefully will spend more time together. The only obstacle is one having to lose close contact with grandkids.

“John and Libby thanks very much for the sterling work done on the trace-miraculous, John Best wishes, John and Lorna.”

Peggy from Finland arrived in the UK in 1967 to take up a summer job. Working as a live – in assistant for a national charity managed orphanage (Methodist Church).

The information we had to work with was as follows:

That’s it? We had no surname and just a UK “nicknamed” Christian name.

We began with the institution where “P” worked. Unfortunately, it closed down in the 1980s. Some records are kept, but DATA protection proved a stubborn barrier.

The Finland Embassy! Wouldn’t so much as acknowledge four emails we sent them!

The next initiative. We advertised for paid freelancers in Finland to work on Press media, radio, etc.

Eureka! A national newspaper took up the story Click here happily resulting in us finding Peggy”

Now a 70-year-old mum and gran still living in Helsinki! Thanks very much, John and Libby for all you did to bring us together again, a miracle, John and Paivi.

Our client fondly remembers him“In the early 1970s. Rather like the type you meet at Petticoat Lane. Usually Jewish (he was), and a bark worse than his bite.

An entrepreneur full of confidence whereas I was somewhat withdrawn. We got on very well!

I can imagine him today with his mobile phone permanently attached to his ear!

Surprisingly and without warning, he seemed to vanish off the face of the earth.

The first port of call was his local historic library. A historic Electoral register revealed his surname had only one “L” instead of two. This apparent minor omission proved a crucial detail.

Our search took in the family origins of Stepney and Poplar in the 1930s. There was an absolute myriad of obstacles in this case.

We discovered a cousin in Israel, but no response. An Internet listing in Madrid similar name double-barrelled. Actually, It was him but he had moved.

After more work and disappointments eventually we traced him to the Dominican Republic. Sadly he passed away in 2011. Buried in an unmarked pauper’s grave! A terrible disappointment to everyone.

“We are forever grateful for the splendid effort you put in finding Dad, John, Thanks mate-you are a star! M. Hyams. Shalom!”

Can’t thank John enough for finding my friend who I lost touch with 50yrs ago.
From the little information I gave, he found her within two weeks. Forever grateful.

You found my friend that I had lost contact with 37 years ago. You found him in under a week whereas I had tried for years.

I’m happy to report he was more than happy to have been found by me and our friendship was there again immediately.

I know I speak for us both when I say thank you for everything you have done in such a short time.

We only had a Christian name, town, road, and a vague recollection of the house she once lived with her parents in 1967.

Here is what he gave us in the way of events.

Dated during the summer of 1967. A lovely girl but for me a bit too clingy. Eventually, due to my intransigent attitude, we parted. I think I imagined I was a bit of a “James Dean” macho and unkind was the way to go.

Ironically 5 years later by pure chance, I happened to bump into her again in a local corner shop where she was working. That was the last time I ever saw her. It could have been a defining moment to reunite us. But being a very awkward encounter I just kind of clammed up.

Our client wanted To feel and savour the journey to where he thought was her house. A re-run of a journey he made by car so often 53 years ago.

Having found the house we moved on quite well. We don’t want to bore you with the finer details here, but it wasn’t easy.

We were beset by a host of false starts. Mainly due to incorrect assumptions poor guesses. Our searches took in the UK, South of France, and ironically back to Muswell Hill. Today a widow aged 74 and sadly living in a residential care home.

“They have rekindled their friendship and our client happily visits her virtually every day. It’s now payback time for his foolish behaviour His parting shot was. If only I had conducted this search earlier! Thanks, John, for your brilliant service. Eternally grateful. Terry and Eileen.” 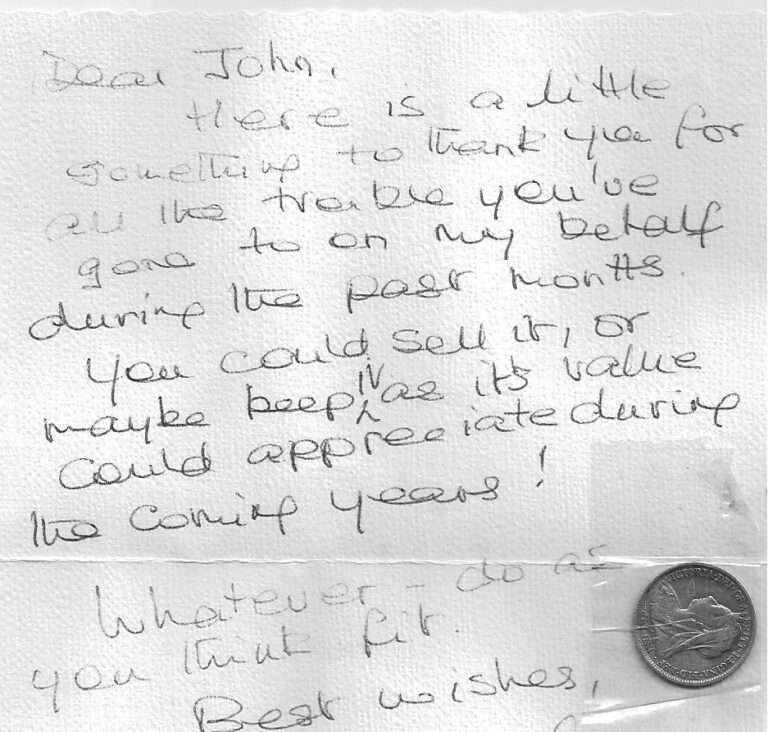 Client #8 We reconnected a lady with an ex holiday romance love.  Not seen each other since 1974

She lives in the UK, he returned to the USA.

How long it will last for is anyone’s guess, but we seem to still have quite a lot in common! We exchange photos of all sorts of things from work projects to family pics etc. Thanks to you and xxxx, I’ll try to keep you in touch each month or so. Keep your fingers crossed for me!
Best regards.

Once again many thanks for finding Richard for me. Now I have to find the courage to pick up the phone.

Hi john I feel you have made fantastic progress in a few days. I hope you have an enjoyable weekend.


John: Hello Frances.
Just to let you know we have located him xxxx. Good news-eh! He is still in Norwich!

John: Thought you would be pleased!

Frances: Hi John I have sent xxxx so you can treat your self to a bottle of wine.
Thanks for all your work

Here unfortunately we eventually had a sad ending. The Lady we searched for died almost 20 years ago.

Hi,
I would very much like to contact a friend who disappeared from my life in about 1974. I fear she may think I grassed her up, which I didn’t do.

Please advise me on how to start your search.

It’s really close here today. We are in a narrow valley, surrounded by boggy hills …..oops …

Thank you for such a good service.  Although I am more upset about xxxx dying so young, I can contact her sisters xxxx and xxxx. Sadly I imagine her parents were probably still alive… nothing worse and such lovely people.
I will recommend your services.

All best wishes to you both

Sincere thanks for providing a successful result.

You clearly have a skill and a passion for this sort of thing, and it is good to still do something that brings a buzz.

Best wishes to you,
Steve

Many, many thanks for the latest Sensational News.

Really looking forward to receiving all of xxxx Contact information. I am sure we will have lots to talk about.

It will be so good to be able to communicate with her once again after all these years.

Well, Thank YOU! You were successful, I hope your head has stopped spinning 🙂

I guess one of the key turning points in the investigation was you realizing that her ex-Husband was called by his second name, and not by his first!

In addition you had to circumvent the considerable obstacle of her changing her name by deed poll, which she subsequent used when she remarried.

I will write a letter to xxxxx in the next few days, and I will let you know of the outcome. If she does not reply then it is ok, although it would be good to exchange a few letters. I guess my motivation is really due to my bad conscience because I failed to keep in touch when I moved to Germany.I lost a few friends when I moved. Whatever, the intention was to get her address, and you managed to get it!  Thanks again…. and of course, always keeping me up to date. It is really appreciated.